Ferrets gain more popularity every year as pets, and maybe you are also wondering if ferrets can eat French fries. Well, you are in luck because I have the answer for you! Ferrets are strict carnivorous predators that need a diet rich in animal protein and fat.

So the answer to the question, “Can Ferrets eat French Fries” is NO! Do not give French Fries to your Ferret!

Ferrets should not eat any foods that are made of potatoes. It is unhealthy for them and will lead to health problems. Ferrets are obligate carnivores, which means they should eat meat only.

Potatoes are also used as an ingredient in many other foods. All those foods are not suitable for ferrets. Avoid giving them French fries, potato chips, potato soup, and similar products.

What Happens if my ferret steals a french fry from me?

If your furry friend happens to steal some french fries from you while eating, it is probably ok. It should not cause significant health problems to your ferret if it happens once. But do not feed french fries regularly to ferrets.

French fries are not a healthy food for any pet, including ferrets. My ferrets do get a treat, especially when I get home from work. However, just the other day, when I was eating my lunch, my ferrets snuck up to me and stole some French Fries right from under my nose!

Luckily, they did not eat them all. I immediately took the French Fries away from them and threw them in the garbage.

The Effects of Potato Starch in Ferrets

Potato starch is not suitable for ferrets. There have been many documented cases in the literature where mice and ferrets fed starch have shown signs of diarrhea, weight loss, and liver disease. In some cases, it has led to death.

Potato starch is a carbohydrate that is converted into glucose when digested in the body. This makes it easy for people to tolerate, but not so for ferrets.

Potatoe starch can lead to very uncomfortable conditions in ferrets that can include excessive gas, bloating, and diarrhea. It may also cause your ferret to experience weight loss and liver disease.

In addition, french fries have a lot of sodium and additives in them and are deep-fried. This alone makes them questionable food items for ferrets.

If you have a sensitive ferret, you should carefully consider what they eat. Potato starch is known to cause problems in many animals and humans who have a sensitivity to it.

Are Ferrets able to consume foods with sugar and starch?

Ferrets should not eat any foods containing carbohydrates, sugars, or starch. Ferrets are carnivorous animals, and they need to eat animal-based foods. Foods with carbohydrates and starches are not suitable for them to consume. Ferrets can become ill if they consume sweet foods – even fruit!

A healthy diet for your Ferret

As mentioned above. Ferrets are strict meat-eaters. Ferrets do have a particular liking for meaty treats such as

In general, a ferret’s diet should consist of 32 – 38% protein and 15 – 20% fat. If you are not comfortable preparing raw meat, bones, and organs every day, introduce kibble to your ferrets’ diet. 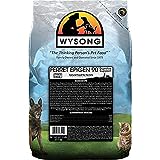 Kibble is dry food, and it is also available for ferrets. It is relatively cheap and easy to store. Make sure that you read the ingredients list. Ferret kibble should not include starch, vegetables, sugar, or high levels of fiber!

A diet high in proteins and fats promotes the good health of your ferret’s musculoskeletal system. However, too many carbohydrates (e.g., sugar) will cause excessive amounts of insulin production, leading to joint problems in ferrets, or later on, even to insulinoma. Cancer of the pancreatic cells!

French fries are made from potatoes. Potatoes are a vegetable. Vegetables are not a natural food for ferrets. French fries made from potatoes contain high amounts of carbohydrates, fats, and calories. Ferrets don’t need these things, and they also don’t digest them well. They can cause your pet serious health problems when eaten regularly.

Feed your carnivore friend meat instead. If you are uncomfortable handling raw meat every day – add kibble to your ferrets’ diet plan. Ferrets should eat a diet that contains 30-38% protein and 15-25% fat.